H is for Hell, humor, and Helen of Troy:

Here again we have a collection of books I haven’t read. Pitiful, just pitiful.

We’ll start with Barbara Hambly, because I have read her, and also because I’ve been trying to do these things in alphabetical order. Have you noticed? First off, I loved Dragonsbane for several reasons: The main character is a homely, married woman who is well able to take care of herself; it’s got a really cool dragon character; the magic is impressive and unique; the dragon talks. Dragonshadow started to get weird for me. The introduction of the demons and body snatching as well as a great dislike for the villains and scenes that started to get incestuous all came together to both confuse me and diminish my enjoyment of the book. The cliffhanger ending to Knight of the Demon Queen was the final nail in the coffin for this series however, and I’ve been hesitant to read the fourth book, or even to restart the series again, even though I’ll probably enjoy it more now that I’m older. Writers, beware of your cliffhangers!

O. Henry‘s Gift of the Magi is a great collection of down to earth, witty short stories that are sure to put a smile on your face. Born William Sidney Porter, Henry was a pharmacist, artist, ranch hand, baby sitter, draftsman, bank teller and journalist before he was a writer. He too was arrested on suspicion of embezzling funds from the bank at which he worked. His father-in-law bailed him out but before Henry could make it to his next court appointment, he fled the country to Honduras where he befriended a train robber. When he finally returned to Texas to be with his dying wife, he was sentenced to five years in prison on embezzlement charges. I almost want to say that his life was more interesting than his stories, but that would be a lie. His stories are wonderful, and if you haven’t had a chance to read them, you should.

H.M.C. is a good friend of mine and the administrator for the short story blog to which I contribute bi-annually. Her debut novel, White Walls was released last year, and if you like psych ward thrillers, you should definitely check it out.

Demian, by Hermann Hesse is another book on my 2014 reading list (I can’t even remember what number I’m on anymore). Alex gives this book high recommendations, and I generally trust her taste in books. Due to a geographic anomaly, Hesse was born with both Russian and German citizenship. After spending some time in a depressed stage in his youth, and having an increasingly difficult relationship with his parents, Hesse attempted suicide and was later admitted to a mental institution before he at last completed his schooling.

I haven’t read anything by Robin Hobb yet, and my knowledge of the fantasy genre suffers because of it. I’m taking recommendations for her work, in addition to the two books I already have in my reading queue.

While I haven’t read The Illiad, this year I did read Homer‘s The Odyssey and I really enjoyed it. The translation that I read (pictured) uses very easily accessible, modern English to tell the story clearly. I feel like a little bit of my education in basic classics has been filled now.

Nick Hornby is a very successful writer of seven novels, but the only one I have read is High Fidelity. I really enjoyed this book as one of the ones assigned in my university literature class. Like Lucky Jim it was a book that really made me think about my life and my relationships, not always in a happy light. Good books do that.

Finally, one of my favorite books of all time, Wizard of the Grove by Tanya Huff. There’s just something in this book that always draws me in–the mythology, the magic, the tangled love story, that Death is once again a freaking awesome character. Wizard of the Grove has influenced my writing in a number of ways, and it’ll always be a book I’ll cherish.

Because I’m a terrible person, I totally forgot Jim C. Hines. To be fair, all my hard covers are on a different shelf because they’re too big. So I’m correcting myself now. I haven’t read Libriomancer yet, but Alex has, and she assures me that I’ll love it. I’m definitely curious. 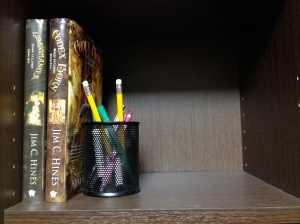 Like what you see up here? What do you think of these authors and their works? Let me know in the comments.